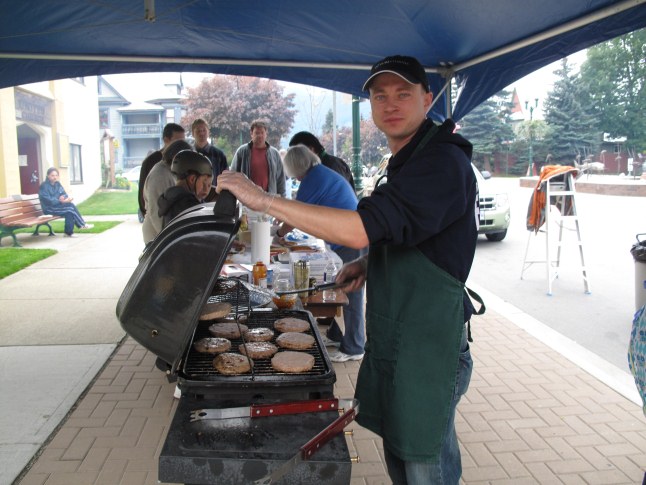 The rain held off and it was a day of fun, food and entertainment for families and friends of the Community Connections Food Bank in Revelstoke BC.  It was the first of three community forums Protein for People is planning for 2010 and its success bodes well for November events in Surrey and Nanaimo.

“We couldn’t be more pleased with how things turned out”, said Protein for People president, John Radosevic.  “The organization was superb, the crowd had a blast, the kids ate and ate and were entertained by face painters and clowns.  Most importantly food bank clients were given information valuable for helping themselves deal with their situations”.

In the process the trade union movement and the local labour council in particular were able to demonstrate their desire to be part of the solution at the community level.  Even the Rotary Club got in on the act at the barbequing end.   It’s what unions in Protein for People and the Labour Council are all about”.

440 hamburgers and hotdogs were given out and about 150 people went through the information booths.  $680 was raised at the event itself and the farmers market prior to Saturday, all of which will go towards purchase of more canned salmon for the local food bank.  Comments were very positive and coverage was extensive in local news papers, on local radio stations and on the cable channels.

“We’d like Protein for People to consider coming back next year for a follow-up event”, said Patti Larson from Community Connections and the event’s organizer.